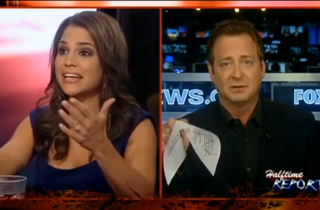 Friday (very early) morning’s edition of Red Eye consisted of the usual comedic musings on the news-of-the-day until a particularly tense exchange developed during the Halftime Report, when TV’s Andy Levy and panelist Diane Macedo got rather heated over the issue of the New York Police Department’s new surveillance system that screams “Big Brother.”

Levy challenged Macedo over her earlier claims that she “never understood the privacy arguments against the police monitoring you … you’re in the middle of a private street … you have no expectation of privacy.” Levy, clearly agitated, said, “I just want to make sure: so do you think the state has the right to track your movement?”

Macedo said she doesn’t mind: “What do I care? I’m not committing any crimes, and if I am, I hope they do know that.”

Panelist Kevin Williamson interjected to ask Macedo if she’d be fine with police keeping track of which books you buy at Barnes & Noble, watching to make sure you don’t buy something too “subversive.” Macedo responded that she doesn’t mind, and it’s not like the government is putting this information out onto Facebook.

This prompted a frustrated Levy to interrupt: “That’s not the point! The point is that the government shouldn’t be tracking citizens’ movements. I don’t know how you can think that’s okay.”

After host Greg Gutfeld stepped in to seemingly defend Macedo, Levy shot back at his colleague, “You said, ‘A scrutinized society is a safer society’? In the name of all that is holy, please stop calling yourself a ‘libertarian.'”

Eventually, after a brief comedic respite, Macedo proclaimed, “The power to see people walking down a public street? I don’t understand how this is such an abuse of power.” Levy and Macedo then shouted over one another until the former ranted: “It’s not fine. If it’s fine for you, go live in a place where everyone else thinks like you. There are people like me who don’t think it’s fine.”