Andy Levy And Red Eye Panel Look At Role Of ‘God, Guns, And Gays’ In 2012 Election 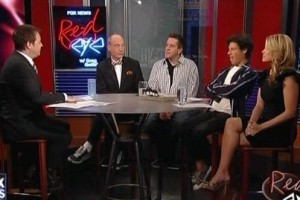 Over at Red Eye last night, Andy Levy brought up two new Pew polls showing that more Americans support gay marriage and gun ownership, which he marked as a big victory for “gay NRA members.” He talked with the panel over whether this means the United States has evolved into an increasingly libertarian nation over time, and what these numbers mean for the two men running in the presidential election.

RELATED: Van Jones: Libertarianism An ‘Extreme Ideology That Would Spit In The Face Of Dr. King’

Comedian Jesse Joyce joked that the only problem with the Pew poll is that they limited themselves to people who had phones and didn’t try to broaden out the survey amongst the hermits. Levy and congressman Thaddeus McCotter basically concurred that these recent polls will finally clinch the November election for Gary Johnson and that’s the end of it. More seriously, McCotter noted that while both President Obama and Mitt Romney publicly have the same position on gay marriage (not in favor), Romney is more pro-gun than the president.

Levy pointed to the notion of “God, guns, and gays” as the big culture war issues in recent political history, and asked McCotter if any of those issues would have to take a sidebar this year. McCotter said that the economy is going to be front and center in most people’s heads. Jill Dobson said that factor probably means people shouldn’t be reading too much into these polls to get a sense of what voting trends will be this year.

Bill Schulz mixed in those two poll results with another poll showing a majority of Americans support legalizing marijuana, concluding that the United States is turning into a more libertarian nation. McCotter added that if the gay marriage poll had reached out to younger people and not just those with landlines, the margin of support would be larger.