Andy Rooney’s Final Essay: ‘I Wish I Could Do This Forever’
video

Andy Rooney’s Final Essay: ‘I Wish I Could Do This Forever’ 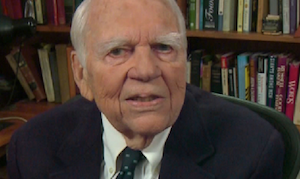 Legendary TV curmudgeon Andy Rooney gave his 1097th and final commentary on Sunday evening’s 60 Minutes. “I wish I could do this forever,” Rooney lamented. “I can’t though.” He vowed he wouldn’t retire as a writer though, and thanked those who had wished him well but warned his fans to leave him in peace. “If you do see me in a restaurant, please just let me eat my dinner.”

Rooney acknowledged that “Not many people in this world are as lucky as I have been.” He admitted to being “terribly wrong sometimes,” but thought he had been right more times than he’d been wrong.

He added that while he spent his first 50 years trying to make it as a journalist, he’s spent the last 30 trying to avoid fame. Rooney said he hated it when people yelled “Hey Andy!” at him at football games.

He concluded his last essay by giving thanks to those who had reached out to him over the years:

This is a moment I have dreaded. I wish I could do this forever. I can’t though. But I’m not retiring. Writers don’t retire and I’ll always be a writer.

A lot of you have sent me wonderful letters and said good things to me when you meet me in the street. I wasn’t always gracious about it. It’s hard to accept being liked. I don’t say this often, but thank you. Although if you do see me in a restaurant, please, just let me eat my dinner.