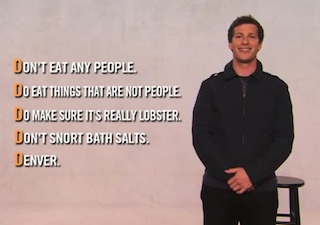 “People. They come in all shapes and sizes, tall, short, fat. thin, young, and old. But it’s important to remember that whatever they look like, you shouldn’t eat them,” Samberg instructed. “Hello, I’m Andy Samberg, internet personality and spokesman for Citizens Are Not Naturally Ingested By Americans League or CANNIBAL. The acronym was a pure coincidence by the way. Our mission is to spread greater awareness of the importance of not eating your fellow citizens. In these cannibal infested times, even Fine Young Cannibals lead singer Roland Gift would think that’s ‘a good thing.'”

“Not eating people is easy and fun,” Samberg continued. “And that’s ‘a good thing.’ He was in a band called the Fine Young Cannibals, so furthermore, just remember the five Ds, don’t eat any people. Do eat things that are not people, like lobster. Do make sure it’s really a lobster and not a person in a lobster costume. Don’t snort a bunch of bath salts and go on a face-eating rampage like some sort of white trash Hannibal Lector. Fifth D is Denver. And don’t eat your dog, even if it’s been barking all night because that would be ‘a bad thing.’ What? People they’re not for eating!”