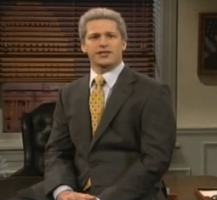 Saturday Night Live star Andy Samberg took a profanity-filled turn as White House chief of staff Rahm Emanuel last night in a segment referred to as “An Even Tempered Apology.” It was, predictably, anything but, as Samberg’s Emanuel unleashed on a tirade of f-bombs and insults. He started with the progressive Democrats (“f*cking turncoats”) who went to the Wall Street Journal with his use of the term “retard,” but then he set his sights on Sarah Palin, who called for his resignation on Facebook.

Addressing progressives’ impatience on health care, Emanuel screams, “Maybe you noticed the Republicans are trying to paint us as Soviet crack dealers!” He went on, crudely: “I have so many legislators in my colon that I need 60 votes just to take a sh*t!” Cute, right?

Then it was Palin’s turn. And this particular attack, even for comedy, seemed very pointed, ideology-infused and well, angry. Not to say a single part of it was wrong! From death panels to quitting to Facebook, Samberg’s Emanuel erupts, ending by calling Palin a “gimmick.” Here’s a portion of the fiery rant:

“Did you forget saying my brother Zeke supports Death Panels and that his philosophy is downright evil? Well, he’s a f*cking doctor who’s dedicated his life to helping people, not a quitter who couldn’t finish dinner. So why don’t you stick to collecting checks for your Tea Party speeches, you half-a-f*cking-politician. Also, you come after me on Facebook? What are you, 14? Here’s a status update: Grow the f*ck up.”

Something tells me the uncensored version of this skit will do well on Hulu. In the meantime, here’s the clip as it aired on Saturday: