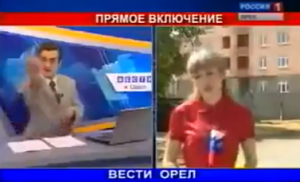 He may not be a sexy spy, but we have found our new favorite Russian in an anchor for Russia 1 who decided to show his feelings for a correspondent by flipping her off. Presumably, the anchor thought he was safely off camera, having just cut away to his attractive, female flipped bird recipient. Unfortunately, his finger was just a second faster than the hands in the control booth and his wonderful anger was captured for all the world to see. Ah, the middle finger, a message that crosses all language lines.

I was incredibly curious to find out what was going on in this video so I searched the massive, labyrinthine hallways of the Mediaite compound looking for a Slavic translator. Then I realized Nick, the dude who sits directly behind me, speaks Russian. He carefully analyzed the video with all the care of a Dan Brown hero before solving the mystery for us all by explaining the content:

Hmm, mystery not solved? I guess we’ll never know what really happened to cause this terrific moment of television. That’s ok, it just gives us the chance to make up our own backstory. My dreamt up version of events involves a torrid love affair, a wedding called off at the last moment, and talking dinosaurs. Yours may differ. Either way, check out the video below.