Ann Coulter And Bill Maher Duke It Out Over Racism, Obama, And Romney Flip-Flopping
video

Ann Coulter And Bill Maher Duke It Out Over Racism, Obama, And Romney Flip-Flopping

Coulter And Maher Duke It Out Over Racism, Obama, And Romney Flip-Flopping 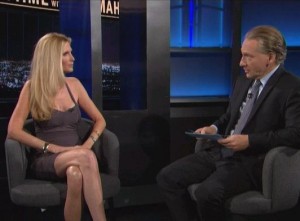 Ann Coulter sat down with Bill Maher tonight for a lengthy conversation that touched on everything from racism in America to how much Mitt Romney flip-flops. Coulter contended that “real racism,” for the most part, no longer exists in the United States. Maher challenged her on how she could think that actual racism is gone and has been replaced by liberal racial demagoguery.

Coulter mockingly asked where all the racists are that liberals keep talking about. Maher brought up a 2008 poll finding in one swing state that a surprising number of Americans are not ready for a black president, and asked Coulter how she could possibly believe that racism is mostly gone. She pointed to polls that found many Americans are not ready for a Mormon president either.

Maher also challenged Coulter’s belief that Obama is the “most liberal” politician to run on a major party ticket for the presidency. Coulter pointed to the Affordable Care Act, which she deemed the “most liberal thing that has been done by any president,” even including Social Security. But back on the racism front, Coulter charged that “liberals are very racist,” citing attacks from the left on Clarence Thomas, Mia Love, and Stacey Dash.

Maher and Coulter went back and forth for a bit on how the intelligence of the voting public and Coulter’s initial support of Chris Christie before Maher got to how Romney has changed drastically starting with his debate last week. Coulter stunned Maher by arguing that Romney “has flipped on one issue in his entire life,” referring to abortion. Maher argued that Romney has flipped on quite a bit, to which Coulter accused Maher of living in a bubble comprised entirely of MSNBC.