Ann Coulter Bashes Obama on Syria: Only Going to Congress to Cover for ‘Idiotic Ultimatum’ 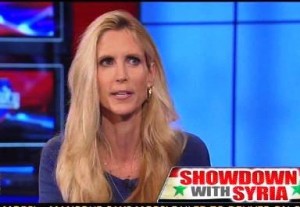 Ann Coulter told Sean Hannity Tuesday night that she’s against the United States taking military action in Syria, given there’s no clear national security risk to the U.S., but also argued that President Obama has no business going to Congress, and the only reason he is doing so is to cover for his own “idiotic ultimatum” in the red line.

Coulter mocked Democrats acting like the use of chemical weapons in Syria is “a crime against God and man that cannot go unanswered” when they “ferociously opposed the war in Iraq.” She argued that while the U.S. took out al-Qaeda in Iraq, in Syria there iss a good chance “this is going to give al-Qaeda the upper hand here.” She reiterated her argument that Democrats are completely weak and untrustworthy on American national security issues, mockingly saying Obama “cares about pretending to be Syria’s commander-in-chief.”

Hannity and Coulter were completely boggled by how much detail about the planned strikes are being divulged ahead of time. They did, however, differ on whether Congress has a duty to vote on any military resolution. Coulter argued it’s not technically a resolution of war, Obama’s going to ignore it anyway, and “the sole purpose of the vote is to make Obama look like less of an idiot.”

Coulter pushed back on Hannity’s assertion it’s Obama’s constitutional duty to let Congress vote, and warned that there is always the potential for Democrats to screw the whole thing up.