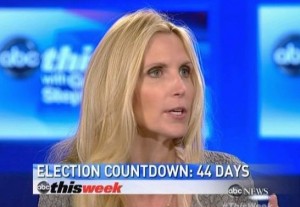 Ann Coulter, besieged on all sides by progressives and moderate Republicans, passionately defended conservative positions on ABC’s This Week panel. On topic after topic, Coulter battled the panel, challenged their assumptions and provide the contrary point of view.

At the top of the panel, Coulter first responded to former Labor Sec. Robert Reich who said the way Mitt Romney presented himself in the 47 percent video shatters the presumption that he is robotic and not passionate, but the problem is that he is passionate about “elitism.”

George Stephanopoulos corrected her, saying that most Americans pay payroll taxes and the 47 percent refers only to income taxes. Coulter responded that Romney was explaining to donors why his message of low taxes simply wouldn’t’ resonate with a certain segment of the population that pays little in taxes.

“When you play the actual clip, I don’t think it’s him being sneering, elitist. He is explaining to donors why you can’t get 47 percent,” said Coulter.

“It was so disdaining,” Reich interjected.

“Well, let’s play it,” Coulter insisted. “Because descriptions in the media are so much worse. And, I notice on MSNBC they keep describing it but won’t show it.”

Univision reporter Jorge Ramos said that the 47 percent message dovetails with an earlier gaffe in which Romney said that he was not “concerned about the very poor.”

She went after those who construed his message as suggesting that, if Romney is elected president, he would ignore nearly half the nation.

Later in the segment, Stephanopoulos turned to the polls and noted that Romney is behind in nearly every battleground state poll. Coulter turned against the conventional wisdom and said that the polls showed that President Barack Obama was in trouble because he consistently polls below 50 percent.

“You also have the media in war mode now,” said Coulter. She attacked the media for relentlessly critical focusing on Romney. “He released his taxes for last year yesterday and it turned out that he gave $4 million to charity, didn’t take all the tax deductions he wants, and they’re attacking him for not taking deductions,” said Coulter. She said that Romney will be able to speak over the heads of the media during the debate and it would make a big difference.

Finally, in a discussion about immigration reform that was brought up during the Univision town hall, Coulter was asked to defend a comment she has made in the past that Latinos and homosexual activists have “commandeered” the concept of civil rights from African Americans.

“We do have to – I mean, there is the legacy of slavery and Jim Crow laws,” said Coulter. “We don’t owe the homeless, we don’t owe feminists, we don’t owe women who are desirous of having abortions or gays that want to get married to each other.”

“No, I think civil rights are for blacks,” Coulter replied.

Watch a variety of segments below via ABC: