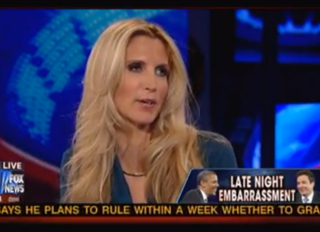 “It’s been a very bad week for [President Obama],” Ann Coulter told Sean Hannity as their segment tonight opened. The two agreed, it was quickly made clear, that the President’s appearance on last night’s Late Night with Jimmy Fallon made him look “silly,” and actually hurt his image.

Coulter and Hannity agreed that Romney’s speech after primaries yesterday was “magnificent,” something that Hannity argued didn’t help President Obama look more presidential. “The President looked kind of silly.. I don’t care if he goes on a late night show,” he added, but he still thought it wasn’t completely serious, he concluded (the graphic below Hannity during this discussion, it is worth noting, read “Late Night Embarrassment”). Coulter continued to praise Romney, explaining that she in part changed her mind about supporting him because “he is so much better than 2008… in 2008, he was good on paper but a little stiff.”

Coulter also took some time to note that while Romney sounded great in her eyes, the President was “going on silly late night TV shows with shockingly low ratings,” taking a quick detour to ask, “who are these shut-ins watching Jimmy Fallon?” She then reiterated her policy reasons to support Mitt Romney, who she called “the President we need the most because he will cut government spending, which Reagan didn’t even do,” and took a few stabs at the global left, joking of the Chinese Communist Party, “if you have figured out how to make the Chinese people unproductive, no one can be unproductive.”

Hannity concluded asking Coulter for some insight on the Republican veepstakes, which she declined since “I’m always wrong in choosing vice presidents.” Hannity admitted he was lukewarm about Rob Portman— “nice guy, boring.” Coulter suppressed her love of Chris Christie for a bit to give general advice: “stay away from the untested ones, the young ones.” With that caveat, she noted that she thought Virginia Attorney General Ken Cuccinelli would be a nice choice, though she thought he should “run for governor of their state” and come back to it. Hannity noted that President Obama didn’t need such experience, but Coulter thought that immaterial: “but we are Republicans, we take the presidency seriously!”