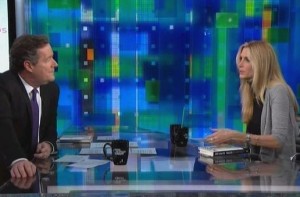 Ann Coulter sat down with Piers Morgan tonight to explain her controversial tweet calling President Obama a “retard” this week. After talking about racism in America and conservative positions on abortion, Coulter defended her usage of the word and its context, railing against the people criticizing her for using what many disabled people would say is an offensive word.

Morgan first brought up the issue of race, a major subject of her newest book. He brought up John Sununu‘s comment on his show last night suggesting Colin Powell voted for Obama because of his race. Coulter played down the significance of what Sununu said, arguing that JFK was supported by Irish Catholics just because of his religion. Coulter said that the United States does not have a serious problem with racism, saying a bigger problem is how much people play up the issue of racism.

In the next segment, Morgan brought up comments made by Richard Mourdock about rape. Coulter said Republicans like Mourdock need to accept that many people believe rape is an important exception in any anti-abortion position. She downplayed the significance of striking down Roe v. Wade, saying the issue would just go back to the states.

Morgan then brought up Coulter’s controversial tweet this week that Obama looked like a “retard” during the third presidential debate. He asked Coulter exactly what she was thinking when she tweeted that out. Coulter said she used the word retard because “it’s a synonym for loser,” and railed against the “word police” for getting on her case about it.

Coulter explained that she does not use the word to talk about people with actual mental disabilities, but Morgan said her response was complete nonsense. Coulter questioned why “retard” is so offensive, when similar words used in the same context are not. When Morgan suggested it is similar to the “n-word,” Coulter rolled her eyes and bemoaned that Morgan tried to make a false equivalency.