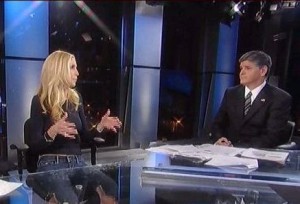 Ann Coulter and David Limbaugh joined Sean Hannity in discussing polling and debates on Monday night. All three agreed that Mitt Romney needs to hit back hard in the first presidential debate, with Coulter especially lamenting that Romney is just too nice.

“They know the polls are a crock,” Coulter said, agreeing with Hannity that the media is trying to deflate enthusiasm. The media want Obama to win because he’s the most left-wing president, and because they like calling Obama’s opponents racist, she said.

About the pre-debate downplaying, Limbaugh noted that Obama has never underestimated himself. This is Romney’s chance, Hannity added, arguing that if Romney takes the right punches, it’ll provoke Obama’s arrogance. And it’ll have to be Romney, Coulter said, because the moderators won’t be doing it.

Looking then at Romney, all three agreed that he’s certainly a good debater, with Hannity adding that he’ll be angry if Romney doesn’t hit Obama as hard as he did Newt Gingrich (during the primaries).

No one has asked Obama the basic, simple, critical questions, Hannity said. “I’ve never met a president that panders,” he said. “That speech that he gave at the United Nations, he was pandering. Who was that speech directed at? Not Muslims. Radical Islamists.”

Back to the debate, Hannity said Romney has to “thread a needle” — be assertive and passionate, but not so aggressive that he’d come off mean.

Asked for final advice, Coulter said Romney has a tendency “to be too gracious, too much of a gentleman.” She added: “I think Romney is genuinely too nice a person.