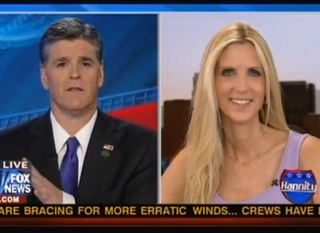 The media treatment of Rep. Michele Bachmann‘s several gaffes this week have raised eyebrows on the right from those that have followed President Barack Obama‘s supposed gaffes. Among them in particular is Sean Hannity, who put together a montage of Obama gaffes in preparation for his guest, Ann Coulter, tonight. Coulter argued there was a double standard for conservatives, and blamed “sexism” on the left for rumors that Rep. Bachmann and Sarah Palin are feuding.

“Let’s hear what she said and reason backwards,” Coulter explained the logic of liberal commentators trying to evaluate Rep. Bachmann’s statements. The recent mini-controversy involving the hometowns of John Wayne and John Wayne Gacy were, according to Coulter, a “perfect example of the elitism or illiteracy of the left,” as in small towns, she explained, even the most tenuous link to a famous person is celebrated. “I went to Joe McCarthy‘s birthplace in Appleton, Wisconsin,” she narrated, where she found “they have a whole museum to Harry Houdini, even though he barely lived there.” That phenomenon, she argued, was also present in Iowa.

Coulter also addressed rumors that Rep. Bachmann and Palin didn’t get along– “they like one another!” These she attributed to sexism: “liberals are just so shocked that there are so many conservative women politicians,” she argued, and assume “there are two girls in the race; they must hate each other.” Despite her disagreements with the left, Coulter went as far as to compliment the President today as “articulate” and “bright, but even articulate bring people are going to stumble now and then.” This in response to several clips of President Obama misspeaking that Hannity compiled, which Coulter had no problem with. Her problem, she explained, was with the double-standard. “It’s only in the case of conservatives where this is taken as a reading as to what their intelligence is.”