Ann Coulter: Although ‘It’s Entirely Obama’s Fault,’ GOP Will Be Blamed For Default 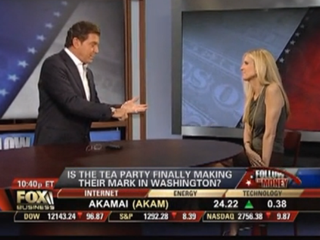 It’s coming down to the wire for Congress to pass a budget that will allow the nation to pay off enough of its debt to stay afloat, and with Cut, Cap and Balance unlikely to become law, the odds that America will have an even more serious economic problem on its hands next week keeps growing. But who will be to blame? On last night’s Follow the Money, Ann Coulter told host Eric Bolling she fully expects Republicans to take the blame when national parks and museums shut down.

Bolling began the segment with what could perhaps be interpreted as some of the tell-tale signs that the Republicans, despite having control only of the House of Representatives, will receive most of the blame– especially the Tea Party faction. “With friends like these, who needs enemies?” he said of Sen. John McCain‘s Senate floor speech comparing the Tea Party to the hobbits in Lord of the Rings, and citing a column by Thomas Friedman comparing the Tea Party to Hezbollah. Coulter didn’t seem surprised by the attacks– “These elected Republicans are in a very difficult position… a lot of stuff is going to be shut down,” she noted, “and it will be blamed on the Republicans, utterly unfairly.” Coulter also argued that the Democrats were leveraging this fact to their advantage, realizing that the ball is in their opponent’s court.

Bolling, meanwhile, did not seem to buy the idea that the government will be severely hampered by the default. “There’s going to be no government shutdown,” he told Coulter, though emphasizing the default would be problematic. “The big stuff will be paid for, but for how long?” she retorted, noting that in the similar 1995 government shutdown, Republicans got blamed for the inability for the government to fully function. Part of the blame, she argued, was the perception that Republicans “hate the government and they think we’re secretly cheering”– a point she had made on Hannity a night before– but unlike in that appearance, she argued stridently that this was not the case: “Republicans are doing everything they can to keep the Smithsonian open.” “Where has the President been on this?” Bolling replied somewhat exasperated, answering his own question with the suggestion that “maybe he’s been picking Michelle’s vegetables.” Coulter agreed that his leadership had been lacking, but unlike Peggy Noonan, refused to call him a “loser”: “that’s mean, and we’re not supposed to be mean.”