Ann Coulter: ‘Everyone Knows… We Secretly Want The Government Shut Down’ 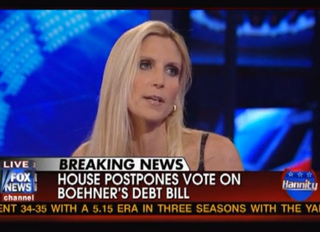 It’s a rare episode of Hannity that includes a segment where the show’s host exclaims “you are dead wrong!” indignantly at Ann Coulter. This is one of those gems. Sean Hannity could not understand the argument that Republicans were in jeopardy should Cut, Cap, and Balance pass the House but not the Senate, and Coulter attempted to explain that the spin would be unfavorable to them. Aside from the media bias, she argued, “everyone knows, deep in our conservatives hearts, we want the government shut down.”

“The people know that– we are going to be dancing a jig,” Coulter joked as the countdown to a debt default ticked away. This came after an extensive talk on the perception of the debt debate from the average American’s perspective who wasn’t following the whole debate. “Republicans will be blamed,” she argued, even though they were playing “a game of chicken with the Democrats offering nothing.” As “Cut, Cap and Balance” is expected to fail, Coulter argued, “that will fit into the counterfactual narrative of Tea Partiers refusing to compromise.”

Hannity didn’t buy this line of thinking at all. “Why don’t they pass Cut, Cap and Balance, cross their hands, and say ‘your move’?” Coulter replied that the problem was that the casual observer would know only that a Republican bill failed– “some stories are big enough,” she argued, using as an example that she had no power over the fact that she was aware of the existence of Snooki. Should Cut, Cap, and Balance fail in the House, too– especially if the Tea Party representatives are the deciding vote, she concluded, “the narrative is going to be ‘These crazy Tea Party Republicans shut down the government.”