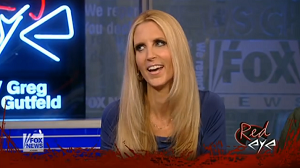 On Fox News Channel‘s Red Eye, Ann Coulter unleashed a fury of controversial comments in response to the repeal of the Don’t Ask, Don’t Tell military policy. However, whether one finds her thoughts offensive or funny depends entirely on one’s own view of Coulter’s role in political discourse. For those who take her every word seriously, you probably will be justified in being upset with her comments. For others who appreciate the high-wire act of trying to make politically-charged issues funny without crossing the line, Coulter, much like Bill Maher, is to be admired for unabashedly saying what she believes and for being unafraid of the consequences.

Host Greg Gutfeld, and others on the panel, didn’t mind allowing gays to serve openly in the military and asked Coulter if they “want to protect us from terrorists, who cares if [they] like Glee?” Coulter did agree that if the new Chairman of the Joint Chiefs of Staff Liza Minnelli says repeal will work then so be it, but just insists that “it go both ways – if we’re going to have gays in the military, I demand that there be heterosexuals at the New York Times.” That was Coulter just warming up.

Later, when Red Eye ombudsman Andy Levy challenged Coulter, business certainly picked up. Coulter’s main argument was that she found it absurd for people not actually serving in the military to tell the military how it should operate and compared it to “allowing this table [of male Red Eye guests] to vote on the choreography of Chicago.” Furthermore, Coulter alleged:

People who are promoting [repeal of Don’t Ask, Don’t Tell] could not care less about the military. They would like to destroy the military . . . and so it’s a win-win for them, either it works, which it won’t, or it doesn’t work and ‘yay the military is wrecked.’

Levy valiantly tried to argue that he apparently has more faith in the military to adapt than Coulter does, but Coulter was quick to dismiss that point in characteristically over-the-top fashion. Coulter sarcastically replied, “why not make them fight with a chainsaw attached to their left leg,” since she too has faith in the men of the military to overcome anything. Then for her final act, Coulter declared “let’s just hope the Germans don’t reconstitute an army when we’re putting girls and gays in the military [because] we are not taking the military seriously.”

Levy found Coulter’s arguments and stereotyping “utterly ridiculous” and decided to just move on. Although just reading the text of Coulter’s comments suggests she fell off the comedic high-wire at the end there, you can always count on Coulter for a provocative conversation.