Ann Coulter: If Moody’s Downgrades America, ‘Darrell Issa Ought To Have An Investigation’ 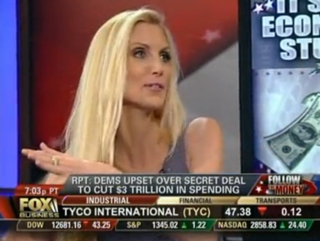 As time slips by and Congress appears no closer to compromise on passing a budget, the threat of the nation’s credit rating experiencing a decline becomes far more concrete. On last night’s Follow the Money, host Eric Bolling appeared skeptical of the idea of Moody’s reducing America’s credit, and, sharing his “conspiracy theory” that Moody’s is colluding with Democrats to Ann Coulter, found her in complete agreement, calling for a House investigation if the credit rating falls.

Coulter began the segment defending her approval of the plan proposed by Sen. Mitch McConnell, which found less Republican support than perhaps he expected at first for being to yielding. Noting the “don’t call my bluff” comment Rep. Eric Cantor attributed to President Obama, Coulter argued that “this is exactly what the McConnell deal does,” putting the President’s name on spending cuts. “No elected politician wants to propose cuts because once you give treats to the people, you can’t take them away.” Bolling countered that the problem with the plan is that it proposed raising the debt ceiling first and cutting spending later, which seemed to him a fairly easy way for Democrats to put off the spending until later, but Coulter reiterated that “the most important thing is to get a Democrat’s name on any spending cut.”

Bolling then turned to Moody’s, adding lightheartedly, “I love conspiracy theories,” and labeling “Moody’s sitting down with the freshmen GOP” a conspiracy, proof “that Moody’s is in bed with the Obama administration saying, ‘hey, you guys, you understand what this means– if this doesn’t go through, if we don’t get the debt ceiling raised, it’s on your back.'” Coulter agreed enthusiastically, adding that she would like to see the Chair of the House Oversight Committee Rep. Darrell Issa investigate should Moody’s downgrade America “on the basis of the debt ceiling not being raised, even though we can keep servicing the debt.” The reduction in credit, argued Coulter, “is Moody’s not wanting to be investigated for what they did with Fannie Mae and the housing crisis.”