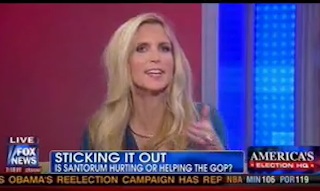 Appearing on Fox and Friends Monday, Conservative pundit Ann Coulter took some shots at Republican hopeful Rick Santorum, saying his continued candidacy would only further hurt Mitt Romney and help President Obama. “I think it is hurting Romney and hurting our chances of taking out Obama by furthering this narrative and humans have a tendency to do this anyway, of always fighting the last war,” Coulter observed.

“Rick Santorum is not the most conservative candidate in the race,” Coulter continued. “This is why Ron Paul keeps birddogging him. He’s a big government conservative and, you know, yesterday on Chris Wallace he was explaining some of his pro-union votes and that sort of thing by saying I’m from Pennsylvania –which by the way, he doesn’t understand when it comes to a much more liberal state like Massachusetts. But beyond that, I mean, the saying about Pennsylvania is that, outside of Philadelphia and Pittsburgh, its Alabama. It’s a very pro-life state and very socially conservative and yet, Rick Santorum voted six times to refund the National Endowment of the Arts. That’s like the bête noire of the social conservative. I mean, they’re funding photos of dead fetuses. Do you think a Bain capital guy who is used to turning around bankrupt businesses is going to consider it a good taxpayer investment to fund bull-whips up men’s derrieres? And here, Rick Santorum voted for it six times, so stop telling me you’re the most conservative candidate! You were a big government and not that much of a social conservative.”

“That’s the thing about it, Ann,” co-host Gretchen Carlson countered. “The reputation that Santorum has in this race is he is the conservative.”

“Because he keeps saying it!” Coulter laughed.

Steve Doocy questioned Coulter over whether Santorum’s plan was a scorched earth strategy going ahead.

“I think it is,” Coulter agreed. “I mean, so many people believe the nonsense about RomneyCare being the same as ObamaCare and if I can just say for the 8 billionth time, no, it isn’t.”

Carlson surmised that the Supreme Court was going to take care of ObamaCare.

“Maybe not,” Coulter interjected. “Maybe not, but President Romney will appeal it.”

Watch Coulter’s criticism of Santorum below via Fox News: