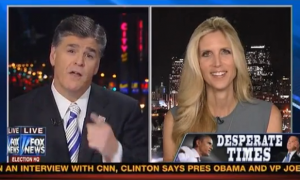 On his show Monday night, Sean Hannity invited Ann Coulter to dissect the “scare tactics” Democrats are using in response to Mitt Romney‘s recent rise in the polls. Specifically taking aim at a MoveOn.org ad — which features celebrities arguing Romney does not support women’s health rights — Coulter criticized the approach, but concluded that it won’t work.

The ad in question stars actresses Eva Longoria, Scarlett Johansson and Kerry Washington. In it, the three criticize Romney for his stance of women’s health issues — also criticizing Republicans for wanting to “redefine” rape, cut funding to Planned Parenthood and have women undergo transvaginal ultrasounds.

Hannity also pointed to those who say there will be riots if Romney wins.

“You know why this is happening?” Hannity asked. “Because his numbers with women are way up.”

“White liberals are always threatening black riots whenever they’re about to lose an election,” Coulter argued, pointing to Al Gore in 2000 (see her book for the quote, she noted).

Black people don’t riot, Coulter said, and if it’s white liberals who are making the threats, we don’t have much to worry about. Speaking more broadly, Coulter said, “I don’t think it will work.” Undecided voters won’t be swayed by things like this, she said.

About the ad starring “air-headed actresses,” Coulter had an opinion or two:

“Just the idea of actresses putting together a political ad like this, it’s like listening to trust fund babies. The reason you have the ability to put this ad together is because of nothing you have done yourself. Completely unearned. God gave you the gift of genetic beauty and nothing between your ears.”

Not to mention, Coulter said, this is coming from the party that defends Bill Clinton, John Edwards and Dominique Strauss-Kahn.

Later, in the second segment, Coulter reacted to her recent appearance on Bill Maher‘s show, during which she sparred with Maher about racism after he cited past polls about people who said they weren’t ready for a black president.

Coulter specifically remarked about Maher’s “cretinous audience,” who she said applauded the idea of a black man not being allowed on Air Force One. There aren’t racists on the conservative side, she said, but there are a “fair number” on the left. She pointed to the reaction to Stacey Dash tweeting her support for Mitt Romney, and treatment of various black politicians, including Mia Love and Allen West.

Toward the end of the segment, the pair turned to debate talk. Particularly moderator Candy Crowley, who Hannity said isn’t exactly the most unbiased (pointing to her earlier remarks about Paul Ryan possibly being a “death wish” for the Romney campaign).

Both segments below, via Fox News: