Ann Coulter On Herman Cain: Our Blacks Are Better Than Their Blacks
video

Ann Coulter On Herman Cain: Our Blacks Are Better Than Their Blacks 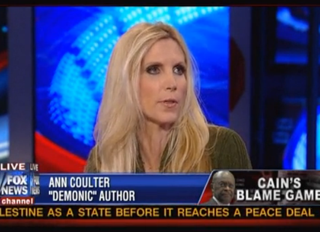 Ann Coulter isn’t buying for one minute that the sexual harassment allegations made against Herman Cain are true. Coulter was one of the first to comment on the story last night as it broke on Geraldo at Large, and returned to Fox News today to give Sean Hannity her take on the matter. Ultimately, Coulter concluded it was a Clarence Thomas-type of attack, made up of “vicious, outrageous charges.”

“They harangue blacks and tell them ‘you can’t be a Republican, you can’t be a Republican,’ it is so hard for a black to be a Republican,” and then complain when conservative events are mostly white-attended, Coulter argued. “Maybe you shouldn’t harangue them so much!” Coulter also told Hannity the source of why liberals “detest conservative blacks” is that “it is ironic in a cruel, vicious, horrible way… that civil rights laws were designed to protect blacks from Democrats,” and now there are “liberal wimen using laws to protest blacks in order to attack conservative blacks with these vicious, outrageous charges.”

Hannity then turned to the absurdity of the charges as he saw them, and alluded to something Coulter seems to call him that would count as harassment in some environments, outraged. “People are humorless!” he exclaimed. Coulter saw something more sinister: “they don’t care about real sexual harassment.” Coulter compared the Cain reaction to that prompted by allegations against Bill Clinton, who got a defense from Gloria Steinem that Coulter described as “the boss gets one free grope.”

With that as a framework, Coulter once again praised the conservative black people she had known, arguing that “our blacks are so much better than their blacks” because “you have fought against probably your family, probably your neighbors… that’s why we have very impressive blacks.” She went on to compare conservative black Americans to the family of the President, arguing that “Obama… is not a descendant of the blacks that suffered these Jim Crow laws,” that he was “not the son of American blacks that went through the American experience,” but the “son of a Kenyan” (a point she made with the caveat that she fully believed the President was an American citizen).