Ann Coulter on Maxine Waters: “It is possible to be black and stupid.”

Ann Coulter on Maxine Waters: “It is possible to be black and stupid.” 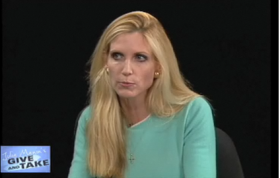 Ever the provocateur, Ann Coulter was on Julie Menin‘s “Give & Take” on Sunday, and came out with a few quotables. She tussled with Menin over race and perceived racism, health care as well as revisiting some old controversies (Christians as “Perfected Jews,” which she still stands by), and the argument she made to Joy Behar that “liberals are a little racist” and her observation that all presidential assasins in U.S. history had been liberals. Menin parries effectively (at one point Coulter raises her voice, then lowers it dangerously) and the result was a pretty interesting exchange — and a buzzy one, since Coulter had a full half-hour to say things, and that is more than enough time for her. (Perhaps the most jaw-dropping thing she said was “I don’t think I’ve ever said anything outrageous.”)

Here’s a pretty stunning exchange, where Menin challenges Coulter on her comments about Democratic Congresswoman Maxine Waters, who is black:

MENIN: You recently said about Representative Maxine Waters that she ‘couldn’t get a job that didn’t involve wearing a paper hat without affirmative action.’ How is that not racism?

COULTER: She, I think, actually, is very very stupid — despite the fact that she’s black! It is possible to be black and stupid.

MENIN: You don’t think there is a racial undercurrent to what you’re saying about her? 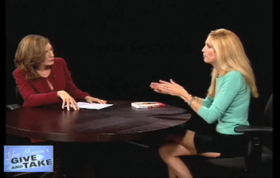 When Menin pointed out that Rangel’s “brushing aside” had been due to legitimate transgressions, Coulter brought up Chris Dodd, and then blamed the mortgage crisis on Barney Frank and Chris Dodd. See below:

Later on in the program, she addressed the comments she made on the Joy Behar show, and reaffirmed who she felt the true danger to Obama was: “If Obama gets shot, it’s going to be by a liberal.” (Starts at about 2:29; prior to that she talks about her feelings on public schools).

Menin has more videos at the Huffington Post, including Coulter discussing her new book, Guilty (not to be confused with the BeeGees/Streisand song), and her perceptions of Michelle Obama.

Let’s hope the next idiot Menin interviews will have something else interesting to say. Oh, wait, the next idiot Menin’s interviewing is me. I taped her show the same day as Coulter, and the show airs this Sunday at 7 pm. Spoiler alert: I don’t say anything half as controversial, unless you count “abortion candy store.” I did say that.