Ann Coulter On Sarah Palin Running For President: ‘I Wouldn’t If I Were Her’ 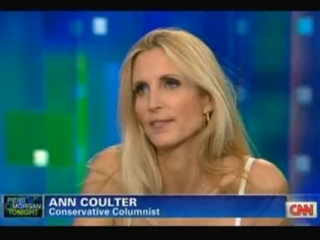 Ann Coulter may spend a great deal of time professionally speculating on who will end up running the nation, but tonight on CNN she told Piers Morgan that among the most insulting questions she has ever received has been “Why don’t you run for president?” Given her base-level aversion to the office, she told Morgan she couldn’t imagine Sarah Palin throwing her hat in the ring: “I wouldn’t if I were in her shoes.”

The segment of her interview with Morgan tonight focused on potential 2012 hopefuls, and Coulter began by reiterating a point she has made very vocally for some months: New Jersey Governor Chris Christie should run for President. That said, she argued that she didn’t see Republicans losing next year: “Obama has such a glass jaw that we might even win with [Mitt] Romney.”

Morgan then asked about the great unknown of the 2012 race, Sarah Palin. Is she running? “I haven’t the first Idea,” she confessed, but “I wouldn’t if I were in her shoes, not President. Maybe Senator or something.” This launched a mini-tirade on how awful being Commander in Chief must be: “It is the worst job imaginable, both running and holding the office.” And as Palin is “virtually the biggest thing on the planet,” Coulter argued, “Why would you wreck your life running for President?” Coulter went on, sharing an amusing anecdote about how insulted she was when people called for her to run for President– “it’s like saying ‘you’re the CEO of a company– why don’t you become a dog walker?'”