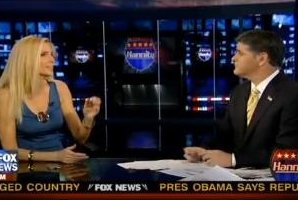 Ann Coulter appeared on Hannity tonight for the second time in two weeks. On her last appearance she took aim at Republicans who didn’t support Christine O’Donnell, and while she got in some shots at the Republican establishment this time as well, Coulter also kept her focus (mostly) on Democrats…especially Sen. Patty Murray (D-WA).

Coulter’s strongest shot at the GOP establishment this week comes at 6:44 of the clip below (is that “swine” she calls them?), but Murray, whom she called an “abject moron” Democrats try to keep from saying anything, was the prime target (as she was in Coulter’s column today) – and Coulter had ammo to work with. Chief among that ammo – a 2002 speech where Murray said Osama bin Laden is loved in the Middle East because he’s spent money on schools, infrastructure, and “health care facilities,” among other things. The remarks were unpopular with many, and while Murray also called bin Laden “an evil terrorist” in the same address, it’s hard to believe anyone thought saying anything the remotest bit positive-sounding about bin Laden wouldn’t be jumped on by political opponents, and rub many others the wrong way.

Coulter also jumped on a passage from a radio interview Murray conducted early in her first term in the 1990s, in which she proposed instituting programs to help children deal with the issue of guns in schools – and compared it to students hiding under desks in the 1950s to prepare for an A-bomb attack (a plan which, of course, would have accomplished nothing in the event of an actual attack).

Finally, Coulter used some of her trademark subtlety in saying that Murray, in once fighting to save a parenting-skills class she was teaching, was “just a public employee trying to save her useless, pointless job.” Coulter is never boring. Video of the segment below.