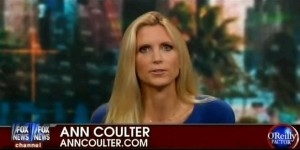 Airport security expert Ann Coulter has some strong opinions about the TSA’s controversial pat-down procedures. She shared them with Bill O’Reilly tonight, making statements that ran the gamut from unsurprising to bizarre.

Coulter begins by calling the intrusive security procedures a result of the “crazy, politically correct world we’re living in now.” (If anyone ever makes an Ann Coulter drinking game, the phrase “politically correct” should be worth a few swigs.) She then launches into a tirade, saying that the TSA’s actions are totally unwarranted:

O’Reilly cuts her off, saying, “Look, I think we all understand the absurdity of the situation. Some Americans say, look, I’m willing to put up with it. I’m one of them.” He points out that there hasn’t been a successful terror attack originating in the US on a plane since 9/11, then asks Coulter what she believes the TSA could do that would be better than the full-body scans.

Coulter answers O’Reilly by completely ignoring his question. First, she concedes that most Americans don’t fly very often; these regulations, then, won’t actually affect a majority of people. And that’s when she inexplicably invokes the Third Reich: “I think the point is, as many have said, this is Hitler’s last revenge. The one thing we won’t look at is who’s doing this.” Wait… what? Have “many” people really been saying that?

O’Reilly smooths over her hyperbole by asking Coulter if she favors profiling over scans (she does, since all terrorists, according to Coulter, are male, foreign-born Muslims). Even so, the host’s quick thinking doesn’t make Coulter’s awkward Hitler comparison seem any less absurd. Watch it for yourself below.