Ann Coulter Pleads For Libertarians To Get Along On Fox, ‘Hates To See Right Wingers Fight’
video

Ann Coulter Pleads For Libertarians To Get Along On Fox, ‘Hates To See Right Wingers Fight’

Coulter Pleads For Libertarians To Get Along, 'Hates To See Right Wingers Fight' 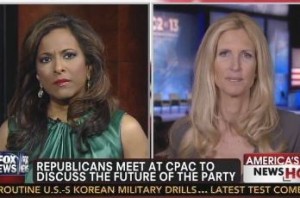 During an appearance on Fox New this afternoon conservative pundit Ann Coulter said she thinks the growing libertarian influence at CPAC is good for the Republican party but spoke out against infighting and getting bogged down in ideological debates over things like “pot.” Coulter told Uma Pemmaraju that she “hates seeing right wingers fight.”

With the main ballroom at CPAC as her backdrop, Coulter pleaded with conservatives to not fight each other while pushing back against the idea that this is actually happening as much as people think.

“I think the establishment, new Republican thing can get overblown. I hate to see right wingers fight,” she said.

Coulter told Pemmaraju that she hopes libertarians, conservatives, and Republicans will all come to stop President Obama because she perceives his agenda and policies to be so dangerous that they’re above petty infighting that is reminiscent of college professors battling it out over tenure.

“Government is enormous, unemployment is through the roof, all Obama’ wants to do is raise taxes. I think all right thinking people should join togeher and stop the infighting,” said Coulter.

On the issue of libertarians overwhelming CPAC, Coulter had some choice words for the young people that have become an increasingly larger presence at the conference. Earlier this year Coulter was booed and heckled by a crowd of young libertarians at a gathering in Washington, DC after calling them pussies.

“I am more libertarians than most people who call themselves libertarians. Richard Epstein, the great University of Chicago law professor, there’s a real libertarian. These college libertaians are often of a slightly different breed and wanting a sense of belonging and they have an awful lot of liberal habits, a sense of this group think and cheering in unison and obsessing over one issue,” she said

Coulter went to note how libertarians are in alignment with conservatives on increasing competition and expanding privatization of public services.

“We want to privatize as much as we possibly can, I don’t think we need to get weighed down on debates over legalizing pot,” she said.

Watch clip below via Fox News.