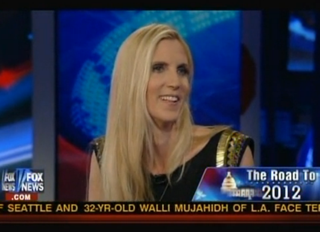 Sarah Palin‘s name is often floated for all sorts of potential projects, especially since she has yet to determine whether she will run for president next year. But here’s a new project: Ann Coulter, still dismayed that her first choice for 2012, New Jersey governor Chris Christie, refuses to run, told Sean Hannity today that she nonetheless does not want to see Palin run for president but, instead, make a Senate bid– in the state of Arizona.

Coulter had plenty of good things to say about the current crop of 2012 candidates– though still lamenting that Christie has refused to run and adding ominously, “wait till I get through with him”– some more than others. Predicting that “it’ll be [Mitt] Romney and we’ll all pretend it won’t be Romney to make the race interesting,” she acknowledged they were all better, to her, than Sen. John McCain. Of Rep. Michele Bachmann, she said she was “fantastic” but couldn’t run from the House of Representatives; of Herman Cain, the same but with any elected office. Tim Pawlenty got the worst criticism: “He’s okay,” and Palin, last but not least, Coulter repeated she could not see run for president.

“I think she should run for Senate or something,” Coulter argued, a point she has made previously. But when Hannity offered that she could do so back in her home state of Alaska, Coulter suggested a move down south: “she just bought a place in Arizona.” It appears a bit counterintuitive, but Sen. Jon Kyl did announce he will retire next year, ample time for Palin to switch residences and campaign. This strategy satisfies Coulter’s desire to keep Palin around without giving her the top job: “she’s a great voice for conservatism; why bother running for president?”