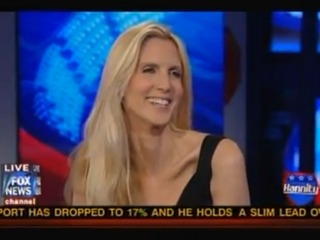 As became apparent yesterday, Sean Hannity has openly declared war on Bill Maher for the onslaught of vulgarities on last Friday’s Real Time, and while for the rest of the week Hannity bashed Maher with impunity, today he faced a bit of a predicament: interviewing one of Maher’s oldest media friends, Ann Coulter. Coulter distanced herself from his opinions but refused to comment as to him personally, instead beaming that he was a “true and loyal friend.”

Hannity began his interview with Coulter with his familiar laundry list of grievances against Maher: “it seems like he’s more angry, more bitter, more liberal, more hateful,” but no one stood up to him. He also noted he was not “going to spend a lot of time on him because he gets too much attention,” to which Coulter retorted, “from you!” She then addressed Hannity’s complaints, half in jest– “you want me to have no other friends than you, Sean Hannity”– half in earnest. “I obviously don’t believe in his politics, I like him, he’s a true and loyal friend, he always has been” she noted.

Plus, she added, “he bought me dinner, so I’m not going to say anything bad about it… I’m easy. I’m a cheap date.” Hannity shook his head incredulously and said, “you’re the only person I know who goes on his show,” in the disapproving way one’s parents might look upon their child’s best friend’s new motorcycle.