Ann Coulter Sours On Sarah Palin: ‘I’m Starting To Dislike Her Because Of Her Fans’ 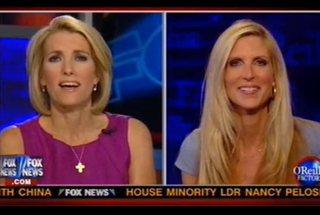 Polls are showing Sarah Palin‘s presidential hopes– if she has them–sinking, and the time to make a decision inching nearer, or perhaps already past, if others on the right are any indication. On last night’s O’Reilly Factor, host Laura Ingraham asked Ann Coulter to assess Palin’s chances of jumping in, to which she expressed some impatience: “I think she’s terrific at what she does… but fish or cut bait here.”

Coulter joked that the Palin presidential speculation may not be over soon, as “Newt Gingrich carried it on for fifteen years,” partially due to the lackluster poll numbers. But even if her poll numbers are bad, Coulter argued, “no conservatives will criticize Palin because they don’t want to deal with the hate mail.” She explained that Palin’s supporters made a vice of their loyalty, so much so that “you say her voice is a few octaves too high… and you’ll be inundated with letters.” She later noted that while “we used to all love Sarah Palin for her enemies, I’m starting to dislike her because of her fans.”

Ingraham switched gears a bit on what was wrong with Palin as a presidential candidate, suggesting that voters were “hungry for real substance” and that Palin “had to do a lot more of the heavy lifting to be taken seriously” than she seemed interested in doing. Coulter agreed, adding that Palin “is terrific at what she does,” but when it comes to the presidential campaign, “fish or cut bait here.”

As for others that may be contemplating a run, Ingraham half-joked that it was “borderline irresponsible” for people who could potentially defeat President Obama to stay out of the race, and while Coulter agreed that all potentially viable candidates should run, added that the hurdles to jump in a campaign are significant.