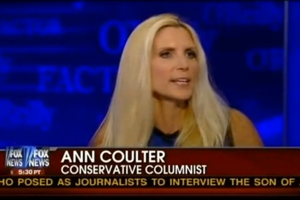 New York Republican gubernatorial candidate Carl Paladino may have lost the support of every single gay- and gay-friendly New Yorker this weekend by warning against the threat of gay “brainwashing,” but at least he can still claim the support of the self-proclaimed “right-wing Judy Garland” herself, Ann Coulter. Coulter took up the very heavy mantle of defending Paladino’s comments on The O’Reilly Factor tonight, because “someone on this network should.”

Coulter argued to a very skeptical Bill O’Reilly that Paladino had only attacked “gay left-wing activists,” not all gays, and had actually refused to read the part of his speech that stated homosexuality is a sin or, as Coulter called it, “the Leviticus part.” O’Reilly wasn’t buying it, telling her that it seemed pretty clear he was attacking all people that identify as LGBT, and that no matter how she spun it, it was hard to see the comments as positive. “I think everybody but you in the world agrees,” he tells her, “this isn’t going to help the guy.” She disagreed, citing the comments are good politics: “[the audience didn’t] want to hear about the fiscal issues. They want to hear about the moral issues.”

Coulter doesn’t exactly have a clean record with gay slurs herself, and defending Paladino would make her quite the unique (read: attractive to the camera) commodity on cable news these days, so it isn’t completely shocking that she would take Paladino’s declaration that he wasn’t a homophobe at face value, if only to play devil’s advocate.

Her defense on tonight’s Factor via Fox News below: