Ann Coulter Talks to Mediaite About Issuing a ‘Fatwa’ for Conservatives, and Why She Mostly Watches MSNBC 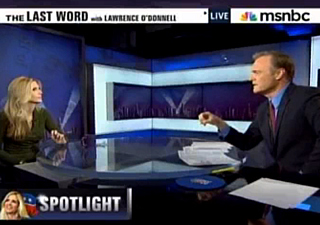 Do you regularly watch cable news outside of your own appearances?

Oh, constantly. Mostly MSNBC. I watch because it’s inadvertently funny. Many people have said the problem with the Internet is that people will compartmentalize and only read stuff that they agree with. Nowhere is that more evident than on MSNBC! People say blindingly false things and never get checked.

[MSNBC weekend host] Karen Finney recently said twice — and she thought it was so great — that the current shutdown negotiations are like “When I was a 16-year-old and asked to borrow my parents’ car and tried to say, ‘But mom, let’s negotiate,’ but she said ‘No, I won’t negotiate, it’s my car.” She thinks that’s how Democrats should treat the situation. And, of course, there was no one there to tell Finney “it’s not our government.” There’s no one on the set to say that’s not a good example we want to be making.

I also like to note that once a week, Chris Matthews will interview an anti-Bush author and, for balance, he’ll get the other author of that book.

Why don’t you go on MSNBC more often?

I’d love to go on, but they absolutely won’t have me. The last time I was on was with Lawrence O’Donnell. That rat bastard promised me they’d have me on again, but poof!

What are your thoughts on the Fox vs. MSNBC battle?

I think If you watched nothing but Fox, you would at least know what they’re talking about on the other networks. If you watch MSNBC, however, you’d have no idea what the other networks are talking about. And Fox’s liberals are serious people. The late Geraldine Ferraro ran for VP as a Democrat; Susan Estrich ran the Michael Dukakis campaign, Bob Beckel ran the Walter Mondale campaign, and Juan Williams has always been a thoughtful guy. The occasional times they throw a conservative on MSNBC, it’s someone you’ve never heard of. Beyond that, they talk about what it is liberals are arguing.

I like Lawrence O’Donnell. And Chris Hayes. What I find so unappealing about MSNBC is the mocking, sneering tone towards their political opponents. Chris Hayes does not sneer or mock. He’s not smug.

If you were Queen of Cable News, who would you fire?

Except for my own enjoyment, I’d fire Chris Matthews. I know from other hosts and people who’ve worked there that he’s the stupidest on-air personality at MSNBC. He’s also hilarious. He compares Ted Cruz to Joe McCarthy almost every night, despite having no idea about McCarthy. And I think that if you watch daytime, Thomas Roberts may be giving Matthews a run for his money.

Did you stop watching cable news after the election?

There was a six-month period where I didn’t read or listen to anything. About that time, I was going through my mother’s collection of Ann Coulter clippings — the largest in the northeastern United States, I should add — and there was a Time magazine write-up from 2004 after the midterm election. It was like a mirror image of after 2012 election. There was a big smiling picture of me, with a caption like “I’m a winner!” And then there was Michael Moore, sad, “I’m a loser.”

It made me remember how incumbents tend to win. Obama did worse than any incumbent in the last 100 years, according to the Brookings Institution. We probably feel the same way the Democrats did after they lost in 2004. Time to buck up.