Ann Coulter: Tea Party Ignores Romney Because They’re Looking At Who Is ‘Calling [Obama] A Kenyan’ 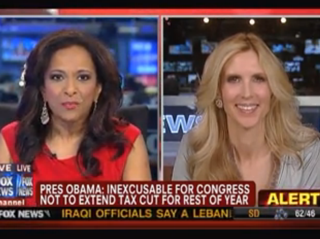 One of the biggest risks of making a bold prediction and later having to walk it back is that it takes several episodes of confrontation to live it down. This is probably the third or fourth appearance in which Ann Coulter has tried to explain how she went from predicting a sure loss for Republicans under nominee Mitt Romney to fully endorsing him, and explaining that she now sees President Obama’s “glass jaw” exposed. Speaking to Fox News’ Uma Pemmaraju, she added a reason for why the Tea Party can’t see his appeal: “they’re looking at who is going to go around bombastically demanding to see Obama’s birth certificate or calling him a Kenyan.”

Coulter’s appearance came up following the President’s statement on the payroll tax deal, which she argued disproved “the nonsense of how Republicans don’t care about the country,” since it would help the President’s reelection chances. She added that the resistance to the Keystone pipeline was a result of Democrats fearing the wrath of environmental groups.

Shifting gears, Pemmaraju asked about Coulter’s “180º” on Romney, which Coulter was happy to clarify. She began by joking that next time she predicts something, “I’m going to make sure its not a day when I’m sick, because I hate how I look in that video,” and calling the prediction, in a time of “Pawlenty fever and Mitch Daniels and Jeb Bush” “amazingly prescient.” She added, “I didn’t hate Mitt Romney… I do think he’s spectacular,” but back then, she couldn’t see what she sees today: “Obama has such a glass jaw now.”

Pemmaraju pressed Coulter on Romney’s conservatism, adding that the Tea Party has resisted him strongly, an indication he may not be as conservative as she thinks. Coulter replied that the Tea Party was “wrong about this” because “they’re looking at who is going to go around bombastically demanding to see Obama’s birth certificate or calling him a Kenyan,” instead of substance. She added that “Rick Santorum and [Rick] Perry are very bad on illegal immigration” despite being considered more conservative.