Ann Coulter Tells Gingrich To Go Home: ‘You Can’t Have Two Affairs And Run For President’ 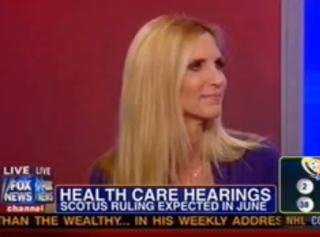 Ann Coulter admits she may not be the best person to ask whether it was improper of Newt Gingrich to not step aside at this point in the Republican primary process, since “I think it was unbecoming of Newt Gingrich to run for President.” Coulter joined the Fox & Friends crew this morning to discuss Gingrich and the Republican primary, but stood up for her candidate Mitt Romney and his health care program, too, distinguishing it from the policy known as Obamacare.

Coulter noted first that she thought “politicians, especially when they are still in office, are hesitant to endorse presidential candidates,” and so that is why the trickle of endorsements to Romney has been a bit slow until it snowballed. Host Alisyn Camerota noted that, given how narrow the field is, “some people this week have suggested that it’s sort of unbecoming of Newt Gingrich to stay neither here nor there.” “I’m probably the worst person to ask,” she joked, “I think it was unbecoming of Newt Gingrich to even run for president.” She complimented him for “say[ing] interesting things” and being “an interesting person to talk to,” but his past, she argued, was “like being a hunchback– you can’t have two affairs and run for president.”

The conversation then shifted to Obamacare,” and host Dave Briggs asked how Romney could criticize it given the similarities. To Coulter, there were no similarities. On the state level, Coulter lauded its coverage of catastrophic health issues, and dismissed James Carville‘s prediction that the Supreme Court overturning Obamacare would be good for the President’s campaign because “that analysis assumes that the American people are clamoring for Obamacare.”