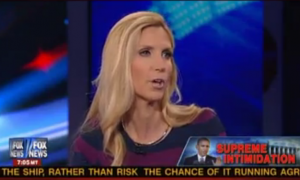 Fox News’ Sean Hannity spoke to Ann Coulter Thursday night about President Obama‘s view of the Supreme Court and the homework assignment an appeals court demanded from the Justice Department. The president is distorting what constitutes judicial activism, they agreed. Coulter further added that usually liberals use judicial activism to their advantage, by trying to “invent” rights for things like abortion and gay marriage.

Hannity began the segment by excerpting the DOJ response that said Marbury v Madison recognized the court’s authority to engage in judicial review, but also that “the executive branch has often urged courts to respect the legislative judgments of Congress.”

He further added, “You would think Mr. Law Review himself, the president,” would understand what that case established.

I used to think some of right wingers were kind of nutty demand to go see Obama’s college and law school transcripts. I want to see them now,” Coulter quipped, since “he doesn’t remember Marbury.” Hannity said, “But they teach that in high school civics class,” to which Coulter added, “But he didn’t go to high school in america, right? Wasn’t that over in Indonesia?” She continued:

Most of us learn how a bill becomes law and what the supreme court does in grade school. Liberals are often trying to push this idea that judicial review means overturning any act of Congress. Or rather judicial activism. Judicial activism is anything when the Supreme Court doesn’t obey what the constitution says — like when they invent rights to gay marriage or rights to abortion or rights to go free if a specific Miranda warning wasn’t read to them. Normally you get the opposite from liberals, because whatever they can’t get through the process of democracy by having people vote on it, they get five justices on the Supreme Court to announce it’s a constitutional right. You only have judicial activism on the left, never from the conservative justices or they would be fantasizing a constitutional right to a flat tax, to bear nuclear arms.

Liberals are lying about what judicial activism is, Coulter said. Hannity added that Obama has attacked the court before: in the 2010 State of the Union address. Coulter said it was “shocking” to attack the justices when they were sitting right in front of him. “He’s very rude, this president,” she added, “in addition to being a very bad lawyer.”