Ann Coulter: ‘I Don’t Care’ About Sexist Or Racist Jokes, As Long As ‘They’re Funny’
video

Ann Coulter: ‘I Don’t Care’ About Sexist Or Racist Jokes, As Long As ‘They’re Funny’ 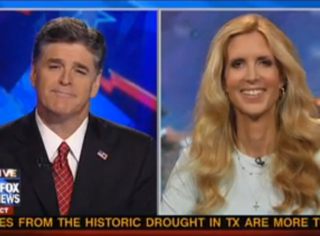 In light of the recent Rush Limbaugh “slut” controversy and its close cousin, the Bill Maher “c-word” controversy, Ann Coulter has emerged as one of the more tolerant of entertainment personalities saying whatever they want. On tonight’s Hannity, Coulter reprimanded liberals for being, among other things, “utter frauds, liars, and hypocrites” and “horrible people,” but warned conservatives not to follow suit and take up the “offended routine.”

Beginning the segment with comments from Sandra Fluke earlier this week, Hannity accused the left of “feigning outrage” to create a “phony, fraudulent campaign opportunity.” “Coming from people who are constantly telling us about their abortions and their vaginas, no, I find it very hard to believe they are so upset about any word Rush Limbaugh uses,” Coulter replied, saying that she personally didn’t care about the words and, in the context of comedy, “dirty jokes, sexist jokes, racist jokes… as long as they’d be funny.” That, she noted, was David Letterman‘s great offense.

Hannity returned to Bill Maher, noting that he disagreed vehemently with the way he behaved himself in public, but made clear, “I’m not trying to get Bill Maher off the air, I’m not trying to boycott him” despite his comments on Bristol Palin among others. Coulter agreed that the children of political figures should be off limits– “if you get involved in political dialogue you’re not supposed to put your family at risk”– and attacked David Letterman for a joke he meant to make about Bristol but actually made about Willow Palin.

Hannity returned to Maher, however, who he insisted he “didn’t care” about. “You give him a lot of publicity!” Coulter laughed, adding that she “happen[s] to think he’s funny.” Hannity thought he was “vicious and mean” and chalked this up to “an obsession with him like you do Chris Christie,” which she objected to. “We should stop acting like feminists going around saying they’re offended,” she concluded, though when asked about the way NBC has covered these stories given the attacks by some of their staff, she agreed with Hannity that they were “utter frauds, liars, and hypocrites.” “Knock it off with the offended routine… you’re horrible people, liberals, but I think we should stop, too,” she concluded.