Ann Coulter To Mediaite: Jon Stewart’s Audience Is ‘A Bunch Of Losers’ And Other Enlightening Bon Mots 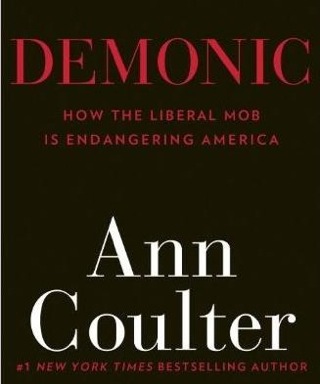 Ann Coulter fears mobs. Her aversion to uncontrolled rabbles is at the heart of her new book, Demonic, and colors everything from her disdain for political figures that engage in blind “groupthink” to her lament that Jon Stewart deserves a smarter audience than the one he has. Mediaite caught up with Coulter last Friday why America could face a second French Revolution, which cable news interviewer lied about reading her new book, and the smartest people on MSNBC.

I’ve noticed that in your book you give fair amount of space to Jon Stewart as well as “serious” critics, and given the “French Revolution backdrop” you provide, I was wondering how you fit a figure like that into that analogy. I was wondering if you could comment on that place in the culture versus someone in the New York Times, for example, saying angering things.

I put the New York Times in about in the same category– at least in terms of the mob’s behavior– as Jon Stewart, where you have these, let’s face it, low-IQ kids and their entire identity is “I’m Jon Stewart’s biggest fan.” They put it on their resumés. That’s their whole identity. By the way, I think Jon Stewart is very funny. His audience is by and large a bunch of losers wildly applauding when they hear the proper name, and you have a similar behavior towards the New York Times. “Oh, to be cited in the New York Times!” “Oh, to get the approval of the New York Times! You rarely see a direct leader of a mob, but you see some leaders that everyone is deferring to and this is the in-crowd and these are the ones we’re trying to impress. That’s the status anxiety chapter of my book. I can base articles on high school bullying– low-status kids trying to impress the high-status kids.

That’s a very wide comparison to draw between the New York Times and Jon Stewart– one is one of America’s oldest institutions and the other is some guy who used to have a show on MTV in the 1990s and has somehow become a pundit. It’s hard to see from any other perspective how, other than influence, they are similar.

Right, and that’s the only way in which I’m comparing them. They are the ones that can get the mob to move. Who else would be in this category– perhaps Lady Gaga. She’s not even a writer– she’s a singer. Could you imagine these dorky video store clerks that they are defined by what music they have on their iPods?

Do you fear one over the other? Which do you think could have more of an impact?

Well, and leaders like to be followed, too. It’s a symbiotic relationship.

Yes, though I would say in Jon Stewart’s defense I suspect he would much rather have a smarter audience that laughs at his jokes and doesn’t applaud his jokes.

It’s a common criticism that the media is full of “infotainment” or pure entertainment instead of actual rhetoric people believe, and the way you describe mob behavior, all they do is listen and then react to what they hear. And it’s a criticism directed at you, too: how much of your rhetoric is things that you actually believe versus things that you think people will listen to or enjoy?

I try to do both! I put a lot research into my books, I’m making it serious points, but I want them to be interesting.

Do you think that’s the same across the board?

It really is striking to me how these are distinctive characteristics that characterize liberals and not conservatives, from the creation of myths and the worship of their leaders as messiahs and idols. We really don’t have that and we’re not really very good followers. Reagan wasn’t even the most popular conservative his first year in office. I read through eight years on Nexis of what conservatives had to say about him back then, when we were the New Right. If you look at the terminology at the time, the New Right was constantly attacking Reagan, threatening to primary him. I suspect it goes back to a book I wrote back about three books ago– Godless— that is certainly reflected in polls that conservatives and Republicans by and large are more likely to believe in God, so there’s a vertical relationship. You don’t have to care what the people around you think. Whereas with liberals, if you don’t believe in a real god, then those around you, i.e. the crowd, becomes much more important. It is striking how conservatives don’t seem to care as much of what Sean Hannity thinks of us, or “I’m Sean Hannity’s biggest fan.”

NEXT PAGE: Why Glenn Beck can talk about the Nazis, and how America could have had its own French Revolution.