Ann Coulter To Megyn Kelly: Democratic Party Gets ‘Mob-Like During An Election’ 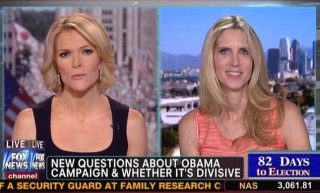 In a rare appearance on a daytime Fox News show, conservative columnist Ann Coulter hit back at the President Obama for his defense of VP Joe Biden‘s controversial remarks that Mitt Romney will “put y’all back in chains,” likening the president and his campaign to the mob.

Reacting to Obama’s Wednesday appearance on Entertainment Tonight in which he dismissed charges of running a “divisive” campaign, Coulter said, “He’s a particularly divisive Democrat but they are all divisive. … The Democratic Party gets especially mob-like during an election. You will notice how they are always using images and not talking about facts like how Medicare will be bankrupt for anyone 45 years old or younger. It’s always ‘the Republicans want to put y’all in chains’ or ‘Bush drove the car into the ditch’ … Could we have actual facts?”

Host Megyn Kelly played a soundbite of MSNBC’s Chris Matthews saying that Republicans are “divisive” because of “nastiness” within the party, like “racists” criticizing food stamps and welfare, or “birthers” questioning the president’s birthplace.

“Any criticism of a Democratic policy is considered a personal attack,” Coulter shot back. “Welfare and food stamps are policies Obama has. He altered the 1996 welfare reform which was the requirement of work. … They have jettisoned the work requirement. That’s what Democrats call a below-the-belt ad while Biden is saying Republicans want to put black people back in chains? That’s supposed to be comparable?”