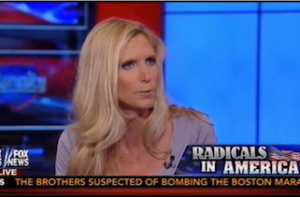 Sean Hannity invited frequent guest Ann Coulter on his Fox News show Monday night to get her take on the developing case against the remaining Boston Marathon bombing suspect. The first Coulter wondered aloud was why authorities didn’t just give 19-year-old American citizen Dzhokhar Tsarnaev the “automatic death penalty” by shooting up the boat he was hiding in when they found him Friday night.

After Hannity expressed his dismay that the suspect has now been read his Miranda rights and won’t be tried as an enemy combatant, Coulter asked, “Why not just shoot up the boat? If we’re not going to talk to him and get any information about the cell, about any foreign influence, they should have kept shooting when they caught him in the boat. Just give him an automatic death penalty there.”

Coulter also went after the FBI for not doing more to prevent the attack in the first place after they were reportedly tipped off by Russian intelligence about the older, deceased suspect Tamerlan Tsarnaev. Now that they know what a bang-up job our FBI did… are they going to trust us with their information to be presented in a public trial?”

Of the slain suspect’s wife, who is reportedly not cooperating with authorities, Coulter said, “she ought to be in prison for wearing a hijab.” Tying the attack to immigration, she said that our policy of us “assimilating immigrants into our culture isn’t really working. No, they’re assimilating us into their culture.” Coulter took Hannity aback by asking of the wife, “did she get a cliterectomy too?”

Hannity furthered the immigration angle, saying, “if people are coming from countries where perhaps they grew up under Sharia law, I think we can make a safe assumption that they have been radicalized.” He added, “Allowing foreign students into the country without investigative background checks that are exhaustive is a mistake, and it’s putting Americans at risk.”

Moving the discussion back to the Boston Marathon bombing trial, Coulter reiterated that the suspect should be tried as an enemy combatant in a military tribunal. Hannity went one step further, saying “I would waterboard him myself.”