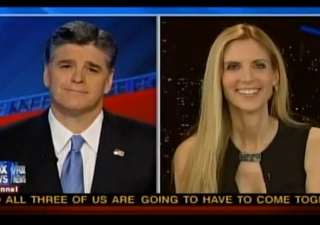 Ann Coulter appeared in good spirits on tonight’s Hannity— “Obamacare,” to her the cornerstone of the Obama administration’s achievements, was deemed unconstitutional. But while she celebrated the takedown of that bill, she expressed to Sean Hannity a certain wariness about today’s other big news– the revolts in Egypt. “Mob riots like this,” she warned, “have never led to something good.”

Hannity began with the good news– at least for both he and Coulter. Based on, among other things, the Federalist Papers and the Commerce Clause, a federal judge has ruled last year’s universal health care law unconstitutional, a conclusion with which both Coulter and Hannity are overwhelmingly happy. “It doesn’t work without forcing people to buy insurance,” Coulter explained, and continued to note that, if Congress can “force all citizens to buy a product,” they should force them “to purchase a gun and a Bible.”

After a bit of chat on that subject, Hannity turned to the far graver situation in Egypt, a topic on which he called Secretary of State Hillary Clinton utterly incoherent and expressed concerns that Muslim radicals would take over in current leader Hosni Mubarak‘s stead. “I could not agree with you more,” Coulter replied, highlighting that, while she is not an expert on Egyptian politics, “I’m a bit of an expert on mobs and a bit of an expert on liberals,” and was outraged at the level of support these protests have gotten in comparison to those in Iran two years ago. She also noted the lack of women out on the streets, arguing that “a mob that is mostly men has never led to something good” (unfortunately for her point, a shot of several women protesting appeared on screen at that precise moment).

While she did call Mubarak “brutally unfair” and refused to support him, she shared in Hannity’s view that it was possible the “democratic motivation of some of the protesters” was in danger of being “hijacked” but fundamentalist muslims.

Hannity and Coulter’s discussion via Fox News below: