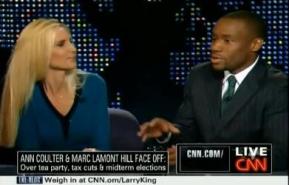 Two popular TV pundits on opposite ends of the spectrum, who usually appear on Fox News, battled it out on Larry King Live about some very serious issues – and did it without yelling and with friendly banter throughout.

A discussion over whether Pres. Barack Obama believes in God led to Ann Coulter‘s programming choice to replace Larry King.

It started with a talk about Christine O’Donnell. “We were never going to take it anyway and she’s a lot of fun,” said Coulter, diminishing her importance to the Senate races this year. “She’s part of the loon wing of the Republican party,” said Hill.

As only King can do, his very broad question, “What is it with this country? What is going on?” led to a somewhat tangential discussion about religion.

“I’m sorry they already picked your replacement because that was my idea for a TV show,” said Coulter. She wants liberals “under a polygraph and I will ask them if they believe in God and if they love their country.” Any idea for a working title? Leave it in the comments.

Hill had a competing show idea – for Republicans. “Ask them if they’re opposing policy because they really believe in it ideologically, or if they just want to block Obama,” he said.

Then it was to Pres. Obama directly, with Coulter wondering why he would “pretend to” believe in God (just like Bill Clinton, she said)? “Barack Obama believes in God!” answered Hill. If this discussion over whether Pres. Obama is an atheist or not seems ridiculous, you really just have to watch the segment. It’s the most grounded debate about a ridiculous issue you’ll ever see. And Coulter and Hill really seem to get along throughout. Maybe it takes a setting like LKL to bring this lively, but decidedly friendly, discussion.