Ann Curry Grills Ahmadinejad: “Did You Steal This Election?”
video

Ann Curry Grills Ahmadinejad: “Did You Steal This Election?” 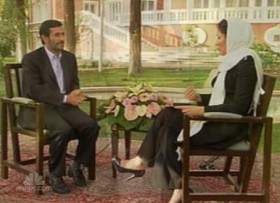 Ann Curry sat down with Iranian President Mahmoud Ahmadinejad yesterday for his first interview since the Iranian elections and the unrest in Iran — and got some revealing non-answers from him. Did he steal the election? “I don’t know what you mean by that.” Was there was any scenario under which Iran would develop nukes? “We do not see any need for such weapons.” Were Iranian dissidents tortured? “It’s possible. I don’t have such information.” What did he think about the death of Neda? “We’re treating this as a suspicious death and we are very sorry about this. And I’m sure that the truth will come to light.” And then there was this: “I don’t know what you mean by ‘no.'”

Ahmadinejad has always been a slippery interview, and a circuitous, verbose speaker to boot. Curry was obviously prepared for this and came in with tough, tenacious questions that left him semantically squirming. The one disappointing part was the lack of follow-up on the Iranian post-election violence — holding his feet to the fire about the government response, the forcible quelling of dissent, the arrests and imprisonments, the coerced public apologies. This is a partial edit so no doubt there will be more to come, but still — these are obviously the highlights, so it looks like Ahmadinejad did not give any more ground on the protests. Curry did get him squarely on the “stealing the election” question (ouch) and pinned him down like a laser on the “Are there any circumstances under which you would develop nukes?” question – for all his verbiage, he would not say “no.”

That said, he also came out in support of “fraternal love and happiness.” So there’s that.

He also talked about how he felt about President Barack Obama and said that the three American hikers imprisoned in Iran for wandering across the border “need to be punished.” So there’s that, too. Clip and partial transcript below; full Curry-Ahmadinejad interview after the transcript.:

On stealing the Iranian election:

ANN CURRY: Inside and outside of Iran, people are questioning the legitimacy of your presidency. So, it is important to ask you, Mr. President: did you steal this election?

TRANSLATOR: In Iran — in Iran, expressing ones point of view is fully permissible. It’s free. And if a person has an opinion to express within the confines of the law they are free to express such opinions. I don’t see any problems.

TRANSLATOR: I don’t know what you mean by that.

ANN CURRY: Did you create conditions so that you would win no matter the vote?

TRANSLATOR: It’s very clear. Whoever becomes a candidate will start a campaign and will do his utmost to win. I think we should be courageous enough to accept the vote of the people. It’s more courageous than participating in the vote itself.

O-kay. “Whoever becomes a candidate will start a campaign and will do his utmost to win.” I think that about covers it.

Here’s Ahmadinejad on the post-election violence:

ANN CURRY: Human rights organizations estimate 4,000 people were arrested in these protests. Some are still missing. There are reports of torture. There are even reports, Mr. President, that some women protestors were raped in prison. Your government has acknowledged that some protestors were killed. You often speak of compassion here inside Iran. The question has to be asked, where was your compassion for your people?

TRANSLATOR: First of all, all of us regret the fact that some people were killed. Two, the police officers and those who accompanied the officers were killed. Their numbers were higher than others.

That stat — or claim of a stat, rather — seems a little fishy to me. This is all the interview/transcript has on this though — I can’t imagine she didn’t follow up there so we’ll check the extended transcript and update accordingly.

And then there’s this, reminiscent of wondering what the definition of “is” is:

ANN CURRY: Are there conditions under which Iran would weaponize?

TRANSLATOR: Well, nuclear arms, we believe, they belong to the past. And the past generation. Today, what brings power to a people is cultural and human power. Cultural influence. Human logic.

ANN CURRY: So, may I assume, then, your answer to that question is, “No.”

TRANSLATOR: My response to what question?

ANN CURRY: Is there a condition under which Iran would weaponize?

ANN CURRY: So, the answer is no, sir?

TRANSLATOR: I don’t know what you mean by ‘no’?

ANN CURRY: I’m asking if there are any scenarios in which you would change what you say is your course and move into creating a nuclear weapon. Am I correct that the answer is no?

TRANSLATOR: We do not see any need for such weapons.

ANN CURRY: You know, it — people will remark that you did not say no, as I’ve asked you three times the same question. You did not say no. Are you sure you want that to be your final answer, sir?

TRANSLATOR: Well, you can take from this whatever you want, madam.

Update: Here is the clip of Ahmedinejad talking about the hikers, followed by the full, 53-minute interview: