Ann Romney Talks About Women, The Economy And Her Husband Mitt In Address To RNC
video

Ann Romney Talks About Women, The Economy And Her Husband Mitt In Address To RNC 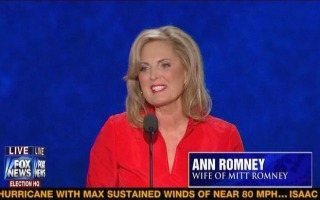 Mitt Romney’s wife, Ann Romney, gave a much-anticipated address to the Republican National Convention on Monday night. There, she spoke of her marriage to Mitt Romney, their family and battles with her multiple sclerosis and breast cancer. She defined why she felt her husband was the leader that America needs at this time in terms that humanized and personalized the Republican presidential nominee.

“I have seen and heard stories of how hard it is to get ahead now,” said Romney. “You know what? I’ve heard your stories.” She said that the women of America feel the burden of America’s economic struggles.

“I love you women,” exclaimed Romney. “You are the ones that have to do a little bit more and you know what it’s like to work a little harder during the day to earn the respect you deserve at work. And then you come home at night and help with the book report because it has to be done.”

“You are the best of America,” Romney said. “You are the hope of America. There would not be an America without you. Tonight, we salute you and sing your praises.”

Ann Romney said that her battles with MS and cancer mean her marriage to Mitt Romney is a real marriage and not a “storybook marriage.”

She praised her husband’s morals and leadership, and ability to work with Democrats – noting that it was not necessary to agree with him to know he is a strong leader. “No one will work harder, no one will care more and no one will move heaven and earth to make this country a better place to live,” said Ann Romney to a standing ovation.

“I can tell you that Mitt Romney was not handed success — he built it,” said Romney. She also talked about her husband’s business background as a personal mission to help others:

This is important — I want you to hear what I’m going to say: Mitt doesn’t like to talk about how he helped others because he sees it as a privilege — not a political talking point. We are no different than the millions of Americans who quietly help their neighbors, their churches and their communities. They don’t do it so that others will thank them. They do it because there is no greater joy. Give and it shall be given unto you.

“This man will not fail,” Ann Romney concluded. “You can trust Mitt.”