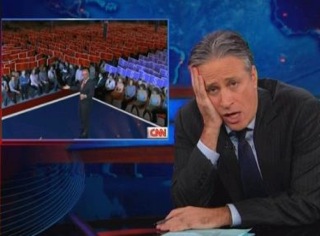 A fixture on the Daily Show during election season has become Jon Stewart watching CNN for the latest news, apparently only to make fun of whatever new gizmos, gadgets, and exasperated Anderson Cooper expressions may prevail. Last night, it was CNN’s “Virtual Convention,” a sort of simulation of little people holding up signs for their candidates.

Stewart opened his segment with the hope that Super Tuesday would be the night to end all nights, as this race has been something of a challenge. “The Republican nominee for President is being elected by erosion,” Stewart joked, noting that the media had, at this point, “run out of metaphors” (Howard Dean was the example of this by comparing the election to an omelet). If Ohio was the decisive state, watching Romney win the state would mean it was all smooth sailing to the general election for him, but long after bringing out the pipe and brandy, Stewart was hit with the harsh reality that “this enormous balloon inflated before our eyes turns into a whoopie cushion,” that the media narrative is that this race is far from over.

He then turned to CNN, where Anderson Cooper seemed, to Stewart, to be making a break for it while Wolf Blitzer‘s levels of enthusiasm were so high Stewart wondered if “they keep him in the dark about things so that his on-screen emotions seem like they’re really happening.” But before he spent too much time mocking Blitzer, he found the “virtual convention,” where little holographic people held up colored signs for their candidates to simulate the Republican convention. “Mitt Romney is very popular with these artificially rendered computer people, I think we found this base!” Stewart joked, as the Super Tuesday votes made him the most regaled among the computer folks. The convention was not all peaceful, however, when Stewart’s World of Warcraft characters came crashing through the convention.