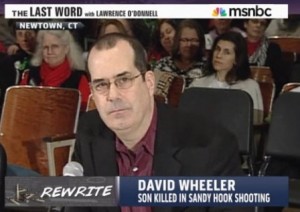 Earlier this week, Neil Heslin, the father of father of late Sandy Hook Elementary schooler Jesse Lewis, asked a question that many of us have wondered about, and which opponents of sensible gun regulation refuse to answer: why anyone needs assault weapons or high-capacity magazines. He didn’t get an answer, only shouted, irrelevant slogans.

On Wednesday night’s The Last Word, host Lawrence O’Donnell turned his “Rewrite” segment over, entirely, to the testimony of David Wheeler, father of the late Ben Wheeler, before the Connecticut legislature’s Bipartisan Task Force on Violence and Public Safety. Wheeler responded, powerfully, to the answer the gun nuts wouldn’t speak.

Wheeler spoke forcefully and eloquently about the need for laws that keep weapons out of the hands of dangerous people, and argued that “military-style assault weapons belong in an armory, under lock and key. They do not belong in a weapons safe in a home. We now have more unassailable proof that this is true.”

But it was Wheeler’s haunting challenge to those lawmakers, and lawmakers everywhere, that cut through the hollow bones of those who stand in the way of meaningful action. “As elected representatives,” he said, “it is your job to craft the legislation that keeps your constituents safe. Thomas Jefferson described our inalienable rights as life, liberty, the pursuit of happiness, the rights with which we are endowed, for the protection of which we have instituted governments.”

“I do not think the composition of that foundational phrase was an accident,” Mr. Wheeler continued. “I do not think the order of those important words was haphazard or casual. Liberty, of a person to own a high-powered magazine, is second to the right of my son to his life. His life. To the right to live, of all of those children and those teachers. To the right to the lives of your children, of you, of all of us. All of our lives. It is second. Let’s honor the founding documents, and get our priorities straight.”

Since this renewed debate over gun regulation began, no one has been willing, or able, to explain why people need assault weapons or high-capacity magazines. I don’t mean the crazies who are preparing for Obama’s coming race war, but this applies to them, too. I mean the people who make, and influence, decisions.

They’ll say that banning weapons won’t work (even though that’s a proven falsehood), or that such laws have no chance of passing (especially if no one ever has to vote on them), or that these weapons and magazines are just “cosmetic” (also a lie), or they’ll simply claim they have a right to them (even though the Supreme Court says they don’t). What they won’t do is explain why anyone needs these weapons, and it’s not because they can’t.

Conversely, we’re not asking the question because we don’t know the answer, we just need these people to say it out loud, so that David Wheeler can answer them. The reason people need assault weapons is because they’re cool, and the high-capacity magazines make shooting them more convenient, as well as more cool. They’re fun to shoot, aren’t they?

But the freedom to shoot a cool-looking gun, and the freedom from having to reload at the target range, and the freedom to pass along a cherished heirloom without a 2-minute background check (which is Wayne LaPierre’s rationale for opposing universal background checks), none of which are enshrined in the Second Amendment, are all second to our children’s right to live, and it’s not a close call. That’s why Neil Heslin won’t ever get an answer, because the answer is monstrous in its triviality. These are toys, paid for with the lives of countless men, women, and far too many children.