Another Vietnam? Morning Joe Takes On Afghanistan War: ‘Taliban Is Stronger’ And Our Influence Is Not
video

Another Vietnam? Morning Joe Takes On Afghanistan War: ‘Taliban Is Stronger’ And Our Influence Is Not 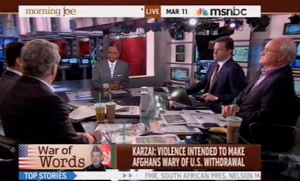 Morning Joe began the week on a serious note, taking a look at the war in Afghanistan in light of President Hamid Karzai‘s remarks that the United States is colluding with the Taliban. The general consensus around the table seemed to be in favor of leaving the country, with some panelists drawing allusions to the Vietnam War.

Everyone knows the U.S. wants to get out of Afghanistan, Michael Steele asserted, questioning what Karzai’s motivations would be to make such assertions — given that President Obama has set a timetable for withdrawal.

For background, some of Karzai’s remarks:

“On the one hand, the Taliban are talking with the Americans, but on the other hand, they carry out a bombing in Kabul,” Mr. Karzai said, referring to a bomb that exploded Saturday in front of the Defense Ministry.

“Yesterday’s bombings in Kabul and Khost didn’t aim to show Taliban’s strength — indeed, they served America. By those bombings they served the 2014 negative slogan,” he said. “These bombings aimed to prolong the presence of the American forces in Afghanistan.”

He “knows we really are leaving and wants to have someone to blame if the country tanks as we go,” Jane Harman posited. But given the how many lives have been lost and how many resources we’ve poured into the country, she said, Karzai should be thanking us.

“That is the frustrating and really the sad part of a lot of this is when you think about the men and women who died in the United States, in Afghanistan,” Willie Geist chimed in, “is that our ability to shape that country perhaps is not what we thought it was going to be.”

It’s amazing that we went into it after Vietnam and the history behind that effort, Mark Halperin argued, adding that we’ll leave the country “at best” in an unstable situation. That sentiment struck a chord with Mike Barnicle. “Afghanistan, has proven over and over and over again, as Hamid Karzai has proven over again this past weekend, it is not worthy of our treasure, whether our blood treasure, our sons and daughters, or our money,” he asserted. “It’s time to come home. It’s not our country.”

Harman wasn’t 100 percent on board, not willing to say the effort was in vain, remarking that we all know why we took on Afghanistan.

“I think Afghanistan is more like Vietnam. I think we had to be there,” she said. “Our country is stronger because you know that you serve at the command of our president, and hopefully next time we will assess better what a tribal society looks like and the way to fight a war there.”

Indeed, the question of the unfavorable comparison to Vietnam arose when we went into the country, Geist and Steele noted.

“What is the strategy here? What do you want this to look like when you leave?” Steele asked. “The people on the ground there still apparently do not appreciate the loss of life and treasure that the United States has committed, committed to the folks who wanted us there to help them get beyond terrorism and Taliban and all of that. And the Taliban is stronger and we are less in terms of our influence and our ability to actually fix what we went in to fix.”