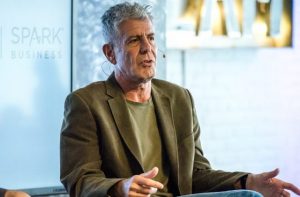 Celebrity chef and host of CNN’s Parts Unknown Anthony Bourdain called out elite East Coast liberals in an interview with Reason, saying that their “utter contempt” for working-class Americans was unhelpful and nauseating.

Bourdain, himself a liberal, is highly critical of Donald Trump. “Wherever one lives in the world right now I wouldn’t feel too comfortable about the rise of authoritarianism,” he said. “I think it’s a global trend, and one that should be of concern to everyone.”

That said, Bourdain was equally critical of his peers for paving the road to Trump. “The utter contempt with which privileged Eastern liberals such as myself discuss red-state, gun-country, working-class America as ridiculous and morons and rubes is largely responsible for the upswell of rage and contempt and desire to pull down the temple that we’re seeing now,” he argued.

“I’ve spent a lot of time in gun-country, God-fearing America,” he continued. “There are a hell of a lot of nice people out there, who are doing what everyone else in this world is trying to do: the best they can to get by, and take care of themselves and the people they love. When we deny them their basic humanity and legitimacy of their views, however different they may be than ours, when we mock them at every turn, and treat them with contempt, we do no one any good.”

“The self-congratulatory tone of the privileged left—just repeating and repeating and repeating the outrages of the opposition—this does not win hearts and minds,” concluded Bourdain. “It doesn’t change anyone’s opinions. It only solidifies them, and makes things worse for all of us. We should be breaking bread with each other, and finding common ground whenever possible.”