Anthony Weiner to Imus: You’re ‘Better Off’ Without Fox or Ailes ‘Propaganda Machine’ 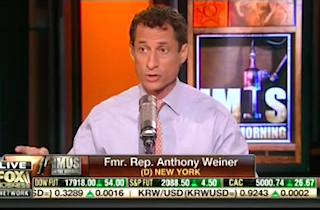 Don Imus is on his way out at Fox Business Network. Last month, the radio host announced that his Imus in the Morning show would no longer be simulcast on the cable channel as of May 29. So when Anthony Weiner stopped by the show Wednesday morning, he let Imus know what he thought about the move.

“As soon as you have Fox Business in your rearview mirror, the better off you’ll be,” Weiner told Imus after remarking that the Fox News operation has oversold the alleged scandal surrounding donations to the Clinton Foundation.

“What are you nuts?” Imus said in response. “Roger Ailes is the best thing that ever happened to me,” he added of the Fox News chairman.

“He is a brilliant guy who created an amazing propaganda machine that you should not be part of,” Weiner told the host. “You are a straight shooter.”

Later in the show, after Weiner had left, Imus’ wife, Deirdre Coleman Imus, called in to express her dismay over the former congressman’s comments. “Anthony Weiner is a total loser,” she said. “I’m furious he would sit there in the Fox studios and completely, completely disrespect them and everyone that works there, including Roger Ailes.”

“I mean, he is the biggest f-in’ jerk on the planet,” she continued. “He has no leg to stand on. He has nothing hard to stand on. He’s an erectophile, and he’s a bottom feeder in New York, riding the subway licking the you-know-what off the floor.”

As she continued to rail against Weiner, Imus defended him, saying, “It’s not a big deal to me, I thought he was good.”