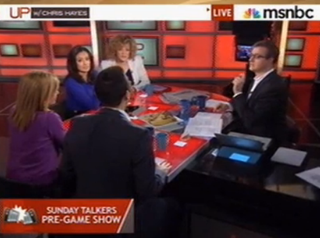 “We need a leader not a reader,” responded Herman Cain to questions recently about whether he had the intellectual horsepower to be President. The general attitude against academia was the topic on the table for today’s Up with Chris Hayes, where some panelists went as far as to call the American right “anti-education” rather than simply anti-elitist, with Ezra Klein left to defend the conservative attitude towards education.

Host Chris Hayes started off with his take on Cain, which he found to be “this ultimate rebuke to expertise, to knowledge, to prepping,” something that he considered had a “long vintage in conservative and Republican politics, but in American politics on both sides of the ideological spectrum [as well].” He described it as “skepticism in this country about experts and expertise.”

That did not seem sufficient to describe the attitude to panelist Michaela Angela Davis, however, who saw it not as a rebuke to expertise, but as plain “anti-education,” a take Hayes didn’t consider fair to the Tea Party. Davis explained, however, that it was not an attitude against “just experts or elites, or people who drink lattes, but facts… or that data is somehow irrelevant. I feel it’s dangerous.” is somehow irrelevant. I feel its dangerous.”

MSNBC contributor Maria Teresa Kumar agreed, adding that “the last people that did that were the last great empire of Rome, where they started gutting education, started moving away from the intelligence; we all know how that story ended,” a comment which met some resistance from fellow contributor Ezra Klein. “That is going a bit too far,” he corrected, arguing that “people have different ideas on education in this country” that are not just pro- or anti-, but “a lot more complicated than that.” In contrast, however, Hayes noted that a comment like “leader not a reader” is hard to misinterpret, but Klein warned against attributing that attitude to the entire American right and conflating “anti-education” with “anti-intellectualism.”