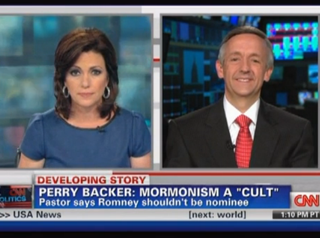 Pastor Robert Jeffress is getting his 15 minutes of fame this weekend after publicly declaring that the Church of Jesus Christ of Latter Day Saints was a non-Christian “cult” and getting the pleasure of introducing Rick Perry at a speaking engagement. After his initial comment, Jeffress went on Anderson Cooper 360º and made some eyebrow-raising comments about President Obama’s “purported” religion. Today he returned to CNN once more, answering in the affirmative when asked if religion should trump competence in elections.

RELATED: Anti-Mormon Pastor To Anderson Cooper: Romney May Belong To A ‘Cult,’ But He Is Better Than Obama

This time, it was Kira Phillips‘s turn to do the honors, asking him to first reiterate his comments and then respond to Perry distancing himself from them. “I believe that Romney is a good, moral man,” he repeated, and of Perry noting he wasn’t surprised or offended at all, but that he remained a Perry supporter because “there are plenty of reasons I believe conservative evangelicals ought to vote for Rick Perry over Mitt Romney, and Mormonism is only one issue.”

Phillips then turned to religion on a more general plane, asking, “what does religion have to do with being a competent president?” and particularly, whether religion “trumps” competence in itself. Jeffress answered “yes,” citing a quote from founding father John Jay: “we have a duty and a privilege as Christians to select and prefer Christians as our leaders.” “Those of us who are evangelicals have a right to select a competent Christian over a competent non-Christian,” he elaborated, beside noting that Romney had been inconsistent on issues such as abortion which were important to him. When asked whether his religious preferences overshadowing his political ones defied constitutional principles, he called that absurd, as he is not a government entity but an individual, free to “apply any litmus test” he desires.