Anti-Mormon Pastor To Anderson Cooper: Romney May Belong To A ‘Cult,’ But He Is Better Than Obama 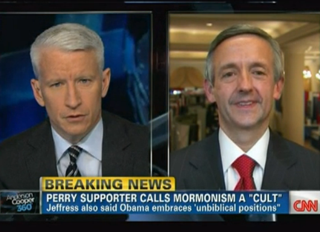 Evangelical pastor Robert Jeffress stole the Friday news cycle with his comments that Mitt Romney, as a member of the Church of Jesus Christ of Latter-Day Saints, was a “non-Christian” in a “cult”– shortly after having introduced Rick Perry as speaker at the Values Voter Summit. Jeffress elaborated on his comments last night to Anderson Cooper in an interview where he argued Catholicism defied the New Testament and suggested President Obama’s “purported” Christianity was not enough to sway his vote.

Cooper opened up with a broad question asking to elaborate on what Jeffress considered a “cult,” and he explained quickly that he considered it a “theological cult as opposed to a sociological cult” because it was founded by a human being– Joseph Smith— and not a divine leader, as well as because they consider the Book of Mormon a new revelation that follows the New Testament. “They have never been considered a part of historical Christianity,” he concluded, adding that “a lot of people say that are Christians, and they are not.” To clarify, Cooper asked him to weigh in on other religions– while he did consider Catholicism to not be a cult (as it was founded by Jesus Christ himself), he did consider that the “basic tenets are contrary to the teaching of the New Testament” because good deeds were necessary to be “made right with God,” and not just faith. Pagan religions he hesitated little to designate cults.

RELATED: Mike Huckabee Would Vote For A Mormon ‘In A Heartbeat’: ‘It Is Not A Disqualifier’

Jeffress also explained why he believed religion played into the election cycle, and why he would prefer to vote for a Christian like Perry as opposed to a “non-Christian” like Romney, citing abortion and birth control funding in Romneycare as an example of the sort of governing he would like to avoid. That said, he did not consider being a “non-Christian” an end-all, be-all in gaining or losing his vote: “I’d rather a non-Christian like Romney who accepts biblical positions than a professing Christian like Barack Obama who accepts non-biblical views,” he explained. This sounded to Cooper as if he did not believe that President Obama was a real Christian, a point he attempted to hammer home several times despite Jeffress noting that he could only say the President was a “professing” Christian because, unlike in Perry’s case, he had not sat down and conversed with the President about his beliefs.

While Jeffress said he understood the word “cult” was “loaded,” he did not adequately explain how he considered his comments appropriate in a political climate. Sure, Jeffress is entitled to his definition of the word, but observers are equally entitled to look askance at the timing of his comments– Perry’s honeymoon period with primary voters is marked over– and at his subtle attempts to feign naivete at how his comments could sway voters already queasy about the LDS Church.