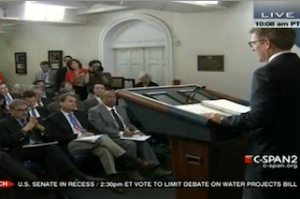 It was only fair that Associated Press reporter Jim Kuhnhenn got the first question to White House Press Secretary Jay Carney at Tuesday’s press briefing. Coming just one day after news broke that the Department Of Justice had secretly seized two months worth of phone records from AP reporters, Kuhnhenn used his question to tie the AP scandal together with the other troubling news stories of the week for the Obama administration.

“For fear of stating the obvious,” Kuhnhenn began, “the White House right now is confronting a confluence of issues: Benghazi talking points, IRS reviews of political groups, Justice Department’s review of journalists’ phone records, and in every instance either the president or you have placed the burden of responsibility someplace else… But it is the president’s administration, so I wonder, doesn’t responsibility for setting tone, for setting direction ultimately rest with the president on these matters?”

Carney conceded that the “responsibility to set tone and to focus on the priorities of the American people is absolutely the responsibility of the president.” After reiterating the points President Obama himself made about Benghazi and the IRS during a press conference yesterday, Carney moved on to the AP issue specifically.

“The president is a strong defender of the First Amendment,” Carney said. “And a firm believer in the need for the press to be unfettered in its ability to conduct investigative reporting and facilitate a free flow of information. He also, of course, recognizes the need for the Justice Department to investigate alleged criminal activity without undue influence.”

Carney attempted to absolve Obama and his White House aides of any wrongdoing in the AP case by saying that other than what they have read and heard from the media, “we have no knowledge of any attempt by the Justice Department to seek phone records of the Associated Press. We are not involved in the White House with any decisions made in connection with ongoing criminal investigations as those matters are handled, appropriately, by the Justice Department independently.”

“It would be wholly inappropriate for me to have answers to those questions,” Carney concluded. “I don’t have them. And I have to refer you to the Department of Justice.”